Though my story may be similar to others it is also different and unique because it is about my personal journey.  My journey began as a means “to get healthy” because I was trying to reel my hubby in to have the same hope and desire for his own health.

You see, several years ago my husband was faced with having an awful 9 MM kidney stone that was in the shape of a football and because of it’s size and shape the physicians told us it could not be passed without first undergoing a procedure that would somehow crush the stone into several smaller pieces so that it could naturally be passed.  This procedure was scheduled to occur one early morning.  I’ll never forget that morning because it was a terrible stormy, rainy morning.  Prior to leaving the house my husband was instructed to take a little pill called “Cipro” because it was supposed to “calm” him and prepare him for his procedure.  However, as I drove him to the hospital for the scheduled procedure he was in quite a bit of pain, very uncomfortable and nervous.  We were finally sitting at the last light approximately a mile from the hospital when I thought my husband was going to vomit.  I handed him one of those fancy, unused, clean vomit bags from the hospital and to respect his privacy I turned my head to look out my window so that I would not be facing him.  As I was waiting for the light to turn green, all of a sudden my husband violently slammed into me!  Immediately I turned to him and said, “Ouch!!!  What are you doing?” and to my surprise when I looked at him he was completely unconscious and all I could see were the whites of his eyes.  In that moment I was quite a mess – I began yelling his name, “Tim, Tim”, but he didn’t respond.  It was then that I feared the worst and reached his neck to check his pulse and then in an instant he jumped up and said to me, “What is wrong with you?”

Needless to say I was overwhelmed with a mixture of emotions from –  complete shock and scared out of my mind, yet so thankful he was alive.  I asked him what happened and he didn’t seem to know.  He said suddenly everything was going black and then he didn’t remember anything after that.  The crazy thing was that he was no longer in pain or uncomfortable and wasn’t even nervous anymore.  In fact, he seemed to be completely fine, but I was scared sick.  That day he didn’t end up having the procedure because once I told the doctors what had happened in the car they said, “Oh his heart probably just stopped for a few minutes, but we need to check him out”.
Well, as I sat there I began to tell my husband things like: “You need to make changes”, “You need to get healthy”, “You need to stop eating this.. and that”.  Well, something suddenly clicked in my head … and I began to re-think some of that because I began facing the truth…. “Hmm… at 238 pounds who am I to tell him he needs to get healthy?” and then I thought to myself “As the mother and wife in my house I need to be willing to make the change first and then my family will join in”. 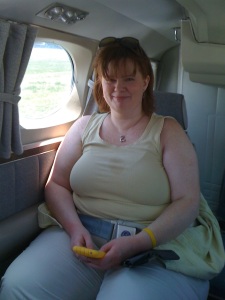 Initially my journey was solely based on “getting healthy”.  Suddenly I was so scared of either of us being unhealthy and the thought of losing my husband frightened me.  Since I was so focused on “health” I wasn’t even thinking about getting skinnier or sexier.  My focus was entirely on getting healthy.  I really think going in with that mindset is what helped me though because I was focused on eating more of the right foods so the weight loss just followed.  In the very beginning I joined Weight Watchers (Points system) for the 2nd time in my life (only this time it actually worked) and my only source of exercise was the Wii Fit, which I really enjoyed.  The first time I started Weight Watchers a year or so earlier it didn’t work and I always believed it was because they didn’t have a mobile app and because of system errors I couldn’t access the Weight Watchers website through my phones web browser so while on the go so by the time I could log my points at home I was always way over my allowed points, but the second time I joined the Weight Watchers points systems I was able to use their mobile app on my phone and found I was able to FINALLY do WW’s on the go (much easier).  In the beginning, I would get frustrated though because I’d buy healthy frozen lunches, but they were 7, 8, or 9 points leaving me little points for breakfast and dinner.  I discovered fruit & veggies are zero points and my journey took a different direction!!  Being a BIG fan (in fact, I believe the biggest fan ☺) of the Biggest Loser I began following some of the contestants and trainers on Twitter.  I loved that Hannah Curlee, Olivia Ward, and Bob Harper tweeted about the foods they ate and I began to follow their example.  Then one night when I was watching my favorite show in the world, BIGGEST LOSER (in case you missed that ☺) I had another major turning point in my journey, as it suddenly dawned on me, ‘Wow these contestants are putting it all out there’!!  And suddenly my journey took another swift turn, I began documenting my journey on the Facebook page that I share with my husband.  I’d document goals met and missed, my actual weight and weigh-in’s, and my various workouts.  At one point, my husband agreed to let me buy a Livestrong Elliptical as our anniversary gift to one another because our Wii Fit broke and I suddenly found the most challenging, but fun workout equipment I’d ever used.  I began dedicating my workouts to various folks battling cancer and other terminal illnesses with a request that our Facebook friends would pray for those battling such terrible diseases.  One of my favorite Facebook statuses was posted on December 3, 2011 and simply stated, “199” because it represented my entry into the One hundredville ☺.  Anyway, I began to believe that if I document everything – successes & failures it may help others.  My original goal was to lose 76 pounds and get to 162 pounds and on October 20, 2012 (a big 484 days after my journey began I surpassed that goal hitting 161.6 pounds ☺).

Anyway, over the course of another 449 days, I lost an additional 29.4 pounds weighing in at 136 pounds.  My entire journey from start to 136 pounds has been a whopping 933 days, but quick or slow – I would NOT change a thing about my journey or my transformation.  I feel that every second and each step has been worth it entirely.  My message to others is, “Yes, you CAN do it!! Trust me – we all have good days and bad days.”  A few suggestions I like to offer to people are as follows: 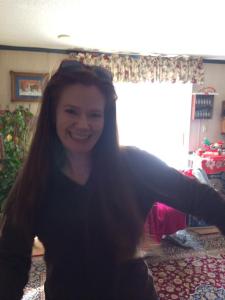 1.      Drink more water than you think you need (If you have a smart phone, download an app called “Water Your Body” it determines how much you need to drink based on your weight).
2.      Forget about this being about losing weight and FOCUS on long-term health.  I believe this makes it easier to accept fluctuating weight on the scale.
3.      Get moving – anyway you can, anytime you can.
4.      Get the right amount of lean protein.  Bob Harper says take your weight and divide it by 2 & that’s the amount of grams you need. Example: If one weighs 200 lbs., then he or she should eat 100 grams of Protein.
5.      If you eat too much of something unhealthy.. log it, deal with it, and MOVE ON.  Decide to get back on track with the NEXT thing you eat.. NOT the next day, the next week, and etc.
6.      Fresh fruit & veggies (this will help ensure you get healthy nutrients & fiber your body needs).
7.      Get enough sleep.
8.      DON’T QUIT.

Now in my life, my health and fitness goals are to focus on maintenance combined with toning.  I’m alternating my workouts to include a combination of the Elliptical, running outdoors, weight training, circuit training, and aerobics.  Some days it feels like there just aren’t enough days to get these various workout activities in, but I still alternate different workouts because my body needs cardio, stretching, weight training, and strength training.  I generally like to workout at least 30 minutes 4 or 5 days a week.

I’ve done a several “official” 5k’s, the Ukrop’s Monument Avenue 10k presented by MARTIN’S in Richmond, VA on March 29, 2014 and the Marine Corps 10k in Fredericksburg, VA on May 18, 2014.  In May 2014, I also graduated from Liberty University with my Associates Degree in Accounting.  I’m doing the 5k Color Run on September 13, 2014 in Richmond, VA.  It’s been a busy couple of years, but I have no intentions to stop now ☺.  In fact, since I’m so fascinated and passionate about health & fitness I would like to get my Personal Trainer Certification sometime this year.

So, I always tell people “everyone has their own journey, their own story, and that what motivated me and motivates me today may be different from what gets you moving”, but essentially that is what makes everyone’s journey so special.  For me, “Fear bought me to this point” and “Habit keeps me here”.  I jokingly say, “If only my hubby had passed out sooner”, but in reality everything happens in His timing and He knows what is best.  I’m so thankful for the wake-up call God gave us before it was too late. ☺

3 thoughts on “My journey to health… Fear bought me here and habit keeps me here.”